For most, a wedding is the closest we’ll ever come to experiencing celebrity status. On your big day, you’re surrounded by admirers, pampered by hired help, pursued by photographers, and lavished with generous gifts – all before you dash away to an exotic destination of your choosing.

Similarly, your honeymoon may be the most expensive and luxurious trip you’ll ever take. In fact, the most recent survey of honeymooners conducted by TheKnot.com in 2010 revealed that the average honeymoon cost $4,466, and luxury honeymooners spent an average of $9,954. In contrast, the BLS reported that in 2008, (the most recent year that data was available) the average American vacation only cost a total of $1,415.

It’s important to pick the perfect destination for this once-in-a-lifetime adventure, and you can save yourself some time and research by taking a cue from some of the world’s most chic celebrities. Even if you’re not touching down in a private jet or renting out the whole island, you’ll still enjoy the same incredible scenery and exotic culture, and you’ll have a glimpse what it feels like, if only briefly, to live like the stars do. 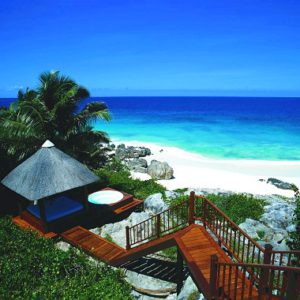 The Seychelles (pictured in this post’s featured photo) are a group of 115 islands in the Indian Ocean off the eastern coast of Africa. With its untouched beaches and peaceful scenery, the archipelago epitomizes the tropical vacation that so many newlyweds desire.

Prince William & Kate Middleton: The Duke and Duchess of Cambridge selected North Island, which is only accessible by helicopter and home to only one resort with 11 villas total. They rented the entire island to secure their privacy but stayed in Villa no. 4 complete with a four-poster bed made of driftwood in the main bedroom, a freshwater rock pool in the garden, and an outdoor yoga pavilion.

Brad Pitt & Jennifer Aniston: In 2000, the former Mr. and Mrs. Pitt rented out all 17 villas on Fregate Island Private in the Seychelles. The island is known as a “jewel of conservation,” home to rare tropical birds and endangered turtles, and one of its beaches is frequently voted the best in the world.

Salma Hayek & Francois-Henri Pinault: In 2009, the billionaire couple also checked into North Island Hotel and enjoyed their 4800-square foot beachside villa that describes itself as a “a Noah’s Ark afloat in warm tropical waters in colours of blue and aquamarine.”

Getting There and Getting Around: Unfortunately, in 2011-2012 Air Seychelles reduced the number of flights available in and out of its airport, so the easiest way for Americans to get there today is through Dubai (Emirates airline) or Abu Dhabi (Etihad Airway) depending on your origin. Once you arrive, only two inter-island ferries operate in the Seychelles between Mahé and Praslin and Praslin and La Digue. Travel to the outer islands requires flying. 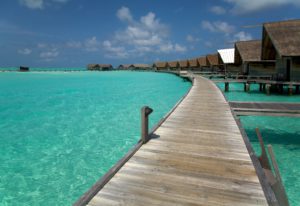 The Maldives is a chain of 1192 coral islands that make up a double chain of 26 atolls. Over 99% of the total area of this country is ocean, making it an ideal destination for divers and beachgoers.

Fergie & Josh Duhamel: After marrying in 2009, the couple stayed at the One & Only Reethi Rah Resort, which can be reached only by yacht from the Maldivian capital of Male. They stayed in the 2,500-square-foot Grand Water Villa with a private infinity pool and a 355-square-foot terrace with steps leading into the Indian Ocean.

Tom Cruise & Katie Holmes: After arriving by private jet for their secret honeymoon, Tom and Katie reportedly spent their honeymoon sailing around the Maldives on the Arctic P, an icebreaker turned super-yacht, owned by the richest man in Australia.

Katy Perry & Russell Brand: To kick off their 14-month-long marriage, the pair stayed at the Four Seasons Kuda Hura in North Male’ Atol, located on stilts above the ocean, accessible to guests by a traditional Maldivian boat. And they later traveled to a different island to stay at Four Seasons Landagiraavaru, set on a remote jungle at Baa Atoll UNESCO World Biosphere Reserve, with open-air (yet air-conditioned) villas scattered privately throughout the island.

Getting There and Getting Around: Visitors from the U.S. often travel through London (Qatar, Emirates, or Sri Lankan airlines) or from Los Angeles through Malaysia (Singapore airlines). Once you arrive in the capital of Malé, you will need to take a boat or plane to the atoll where you are staying. Switching resorts or islands once you’re there is generally not recommended due to the high cost and inconvenience. 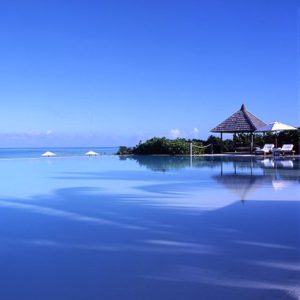 The Turks and Caicos Islands (TCI) are a British Overseas Territory part of the Lucayan Archipelago. Located in the North Atlantic Ocean and southeast of the Bahamas, TCI is loved for its world-famous beaches, convenient access from the U.S., and welcoming culture.

Ben Affleck & Jennifer Garner: Bennifer 2.0 became official in 2005 at the Parrot Cay resort. The private island resort, which is a 35-minute ride from Providenciales, has a soothing and beach luxe interior and with soft, white, cotton-covered chairs, airy four-poster beds and teak furnishings.

Eva Longoria & Tony Parker: The now-divorced couple also spent their honeymoon at the exquisite Parrot Cay resort. In 2007, Eva told People Magazine of their ultra-secluded stay, “We didn’t see people for days with the exception of room service bringing us food.”

Natalie Portman & Benjamin Millepied: The young couple brought their young son and enjoyed a private villa at Grace Bay Club, a luxurious resort with more than 11 acres along the incredible Grace Bay Beach. Rates for their nicest residences can be as high as $13,000/night depending on the season.

Getting There and Getting Around: American Airlines, US Airways, Delta, JetBlue, and Continental offer direct flights from the the east coast to Providenciales. On the islands, taxis are available but expensive; renting a car makes more sense for those who want to move around. 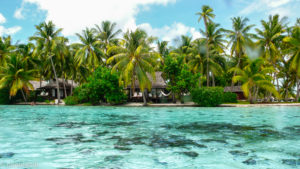 Part of the French Republic, French Polynesia is made up of 118 islands and atolls in the South Pacific Ocean. Bora Bora and Tahiti are the most famous of the islands, known for their picture-perfect beaches, luxe accommodations, and overwater bungalows.

Nicole Kidman & Keith Urban: The second Mrs. Tom Cruise and her second husband chose Bora Bora for their honeymoon escape, and they stayed at the U.S. Royal Estate at the St. Regis resort. The 13,000 sq. foot villa was “designed to resemble an opulent Polynesian village” and costs $15,000 per night.

Carrie Underwood & Mike Fisher: Like most visitors who dream of Tahiti, this couple came for the overwater suite with glass bottom floors overlooking crystal clear water. They stayed at the Le Taha’a Island Resort & Spa, which is famous not only for its ocean setting but also “lush vanilla plantations and its black pearl farms.”

Getting There and Getting Around: For visitors coming from the U.S., direct flights leave from Los Angeles and Honolulu to Tahiti (Air Tahiti Nui), which has the only international airport in French Polynesia. Frequent and inexpensive connections to the larger islands are available both by boat and by air.

Which of these honeymoon destinations would you choose?