Lab Grown Diamonds vs Natural: 6 Differences Between Them (2022) 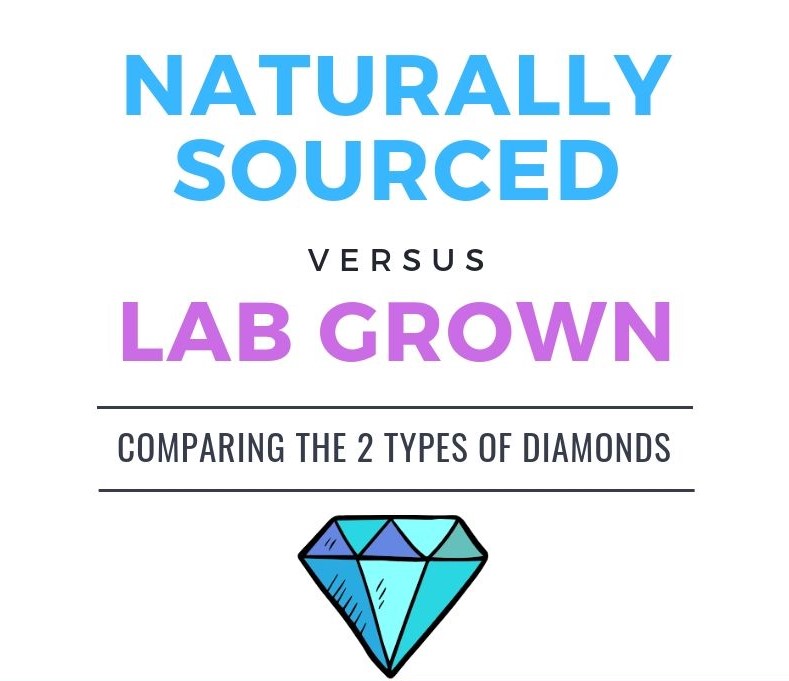 Shopping for an engagement ring, wedding band or everyday diamonds, can be expensive, stressful and can offer a whole lot of uncertainty because let’s face it, you’re no gemologist. You will have a million and one questions to ask and that’s okay. The average person doesn’t know much about diamonds. One of the most pressing questions you will face is whether to purchase a naturally sourced diamond or purchase a lab grown diamond. Don’t panic, we’re here to break it down for you, in terms that you and your bride will most definitely understand.

So, what’s the big deal? Is there a difference between lab grown vs natural diamonds? Of course, there is. But how can you tell? Decades of research and technological advancements now make this tall task much easier and the system is improving every day.

1. How Natural Earth-Mined Diamonds are Formed

Diamonds have been around for almost as long as Mother Earth has. A naturally sourced diamond forms deep under earth’s surface over billions of years. The diamond itself is formed due to extreme pressure and high temperatures. It is then brought to the surface through volcanic eruption and sits in a volcanic rock formation, known as “kimberlite pipes.” The diamond then patiently awaits to be mined by professional mining engineers.  Mining engineering, according to Wikipedia, is an engineering discipline that applies science and technology to the extraction of minerals from the earth.

2. What Material Are Natural Earth-Mined Diamonds Made of:

Okay, so we know how diamonds form but what is inside of a real, naturally sourced diamond? According to the FTC (federal trade commission), a diamond’s material consists of pure carbon crystallized in the isometric cubic system. Most diamonds, however, aren’t 100% pure carbon. They often consist of other materials such as nitrogen and inclusions, small pieces of foreign objects that have been cemented into the still-forming diamond, billions of years ago. That is the simplest way to explain how diamonds are formed and what materials it consists of.

3. How Lab Grown Diamonds are Created:

Now, for its #1 competition, we will explore how lab-grown diamonds are made and how they differ from naturally sourced diamonds. It’s 2019 and technology is making new strides every single day. It’s no surprise that we have discovered a way to virtually copy a natural diamond, inside a laboratory. This practice starting back in the 1950s but wasn’t available on the market until as recent as the early 2010s, almost 60 years after the practice was first introduced. According to GIA Distinguished Research Fellow, Dr James Shigley, there are two methods used when making lab-grown diamonds.

The first method basically mocks how diamonds are made deep underneath earth’s crust, using high pressure and high temperature. This method is known as HTHP. The second method known as chemical vapor deposition or CVD involves “breaking down the molecules of a carbon-rich gas, such as methane, into carbon and hydrogen atoms, which then are deposited on diamond seeds to produce a square-shaped, tabular diamond crystal” according to the official GIA educational website.

Lab-grown diamonds can take a month or so to make, compared to a naturally sourced diamond that took billions of years to form, deep under earth’s surface. This fact alone, appeals to the buyer (you), because they typically find the natural process much more unique, therefore willing to spend more money on it.

Another big difference is that naturally sourced diamonds are expected to increase in value over time, whereas lab grown diamonds are expected to decrease in value over time. If you’re considering selling your diamond in the future (let’s hope not but with the average divorce rate in America, it’s a possibility) the naturally sourced diamond will be worth much more.

4. How to Tell The Difference Between Naturally Earth-Mined and Lab Created Diamonds?

Research is constantly being conducted by the GIA and new methods to tell the difference are emerging daily. To identify lab created diamonds, GIA has developed a screening device called GIA iD100. This $5,500 device combines advanced spectroscopic technology with GIA’s 60 years of diamond identification research to distinguish natural diamonds from lab grown (HPHT and CVD) diamonds and diamond simulants.

In a new era where technology has completely taken over, you can see why the price of a naturally sourced diamond is much higher than its counterpart; lab grown diamonds. Everything, nowadays, can be copied and reproduced. We’re living in a virtual reality. Real diamonds connect us to mother earth because of its rarity and geological origin. Think of it like this, would you rather eat GMO or organic foods? The answer is easy, but the price difference is obviously a factor.

According to Paul Zimnisky (diamond industry analyst), in the second quarter of 2016 the average online price for an F–H, VS-clarity 1.5 ct. round lab-grown diamond was $10,300. Five years later, a gem with the same specs saw its price drop by nearly two-thirds—to $3,975.

As reported by JCK, The are many reasons behind these price declines, including increased competition, initially inflated margins, and the seemingly immutable law that tech items become cheaper to produce over time.
“Of course, their price is going to go down; it’s a manufactured product,” says Zimnisky, who thinks growers are in part driving the decline.

Below is a chart comparing prices of 1 carat to 5 carat round cut lab grown diamonds vs natural earth mined diamonds. All diamonds used in the comparison are GIA Certified, G Color, VS2 Clarity, Excellent Cut Polish & Symmetry, no Fluorescent.

6. So Why Should I Buy One or The Other?

If you can afford a real, naturally sourced diamond then definitely take that route. If money is an issue and your bride isn’t concerned over the rarity of the diamond, purchasing a lab grown diamond works just the same. Remember, the difference isn’t obvious to the naked eye or even a professionals naked eye.

What are The Advantages of Natural Diamonds?

If it’s impossible for even a gemologist to tell the difference between lab-grown and real diamonds, what are the advantages of spending the extra money on the genuine article?

Even though you can’t visually identify lab created diamonds versus natural, there are differences between them.

Natural diamonds hold their value
A diamond ring isn’t just an expense — it’s an investment. At the time of writing, the price of diamonds has been increasing steadily over the last 18 months.

Of course, you might never plan on selling your jewelry. If you do ever need or want to though, there’s a good chance the value of the ring will be the same or even have increased. They also make ideal family heirlooms that can be passed down for generations. A cheaper lab-grown alternative simply doesn’t have the same monetary or sentimental value


Natural diamonds have more prestige
Scientifically speaking, there’s no difference between lab-grown diamonds versus real diamonds that have formed over billions of years. They’re made of the same carbon atoms, and look identical to the naked eye of laymen and professionals alike. So why would anyone buy the more expensive option?

For the same reason people don’t buy Diamond engagement rings that they just replace once a year when it becomes dull or breaks.

An engagement ring is supposed to represent something long lasting; a special and unique love between two people. Diamonds are valuable because they’re rare, and the way they’re formed means that there’s a finite amount of them. To own one is to own a piece of the earth’s history. Lab-grown diamonds can simply never have the same prestige

Can You Insure a Lab Created Diamond?

We always recommend insuring your diamond ring. After all, it’s one of the most significant purchases you or your partner will ever make. But can you insure a lab created diamond?
Although much cheaper than natural diamonds, they’re still a significant purchase, and it is possible to insure your lab-grown diamonds against loss, theft or damage.

To insure your lab-grown diamond you’ll need a lab certificate of authenticity or an original invoice, get your jewelry appraised by an expert and then find a suitable insurer. We’d recommend checking out the reviews of a few different jewelry insurers first and shop around for the best price.
You can also always ask your homeowners insurance if they can add jewelry coverage to your existing plan.