...And this computer, which

What You Need to Know About
Cushion Cut Diamonds

“According to our own industry research,
15% of couples in the United States
got engaged with a cushion cut diamond in 2019.
We expect this trend to continue in 2020„
Omid Semino, Diamond Mansion CEO

Planning to pop the question?

Whether you're seriously considering this next step or just beginning to explore your ring options, you can't go wrong with this timeless, classic look.
Today, we're taking a closer look at the features that make cushion cut diamonds so special and spectacular. Along the way, we'll share important details about the different types of diamonds included in this category, as well as a helpful cut guide to take along on your next shopping adventure.

What Defines a Cushion Cut Diamond?

Cushion cut diamonds marry the sleekness of a square-cut diamond with the femininity of a round diamond. The result is a soft square with rounded corners that looks like (you guessed it!) a cushion.

This iconic cut has been around for more than 200 years, although it was known as a "mine cut" to ladies in the early 19th century. At that time, many other kinds of gemstones were also designed to be cushion cut, as the look was so popular!

The main difference between the cushion cut that dominated back then and the modern style appreciated today? Earlier mine cut diamonds normally had 58 facets, while newer versions have 64 facets.

Want an impressive look at a historic cushion cut diamond on an incredibly large scale? Check out the famed Hope Diamond, which weighs in at a staggering 45.52 carats, featuring 60 facets plus additional facets on its girdle!

While soft corners and a square shape define cushion cut diamonds as a whole, there are many variations that set certain styles apart from one another. Next, let's take a look at a few of the most common types of cushion cut diamonds, and the features that each exhibit.

As its name implies, a square cushion cut diamond features sides that are the same in length, resembling a standard geometric square.
Its corners are rounded, rather than sharp.
Until the 20th century, this look dominated and defined the cushion cut aesthetic.
Below is three examples of beautiful square cushion cut engagement rings. 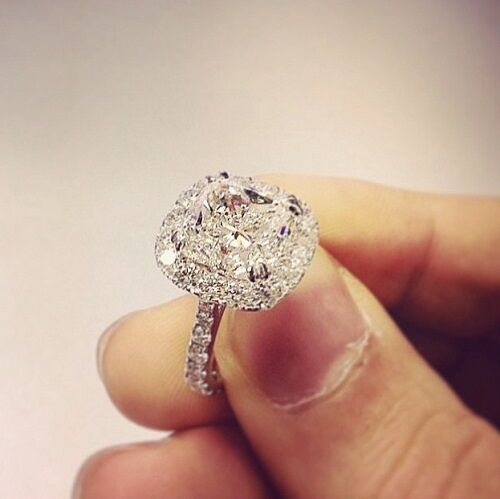 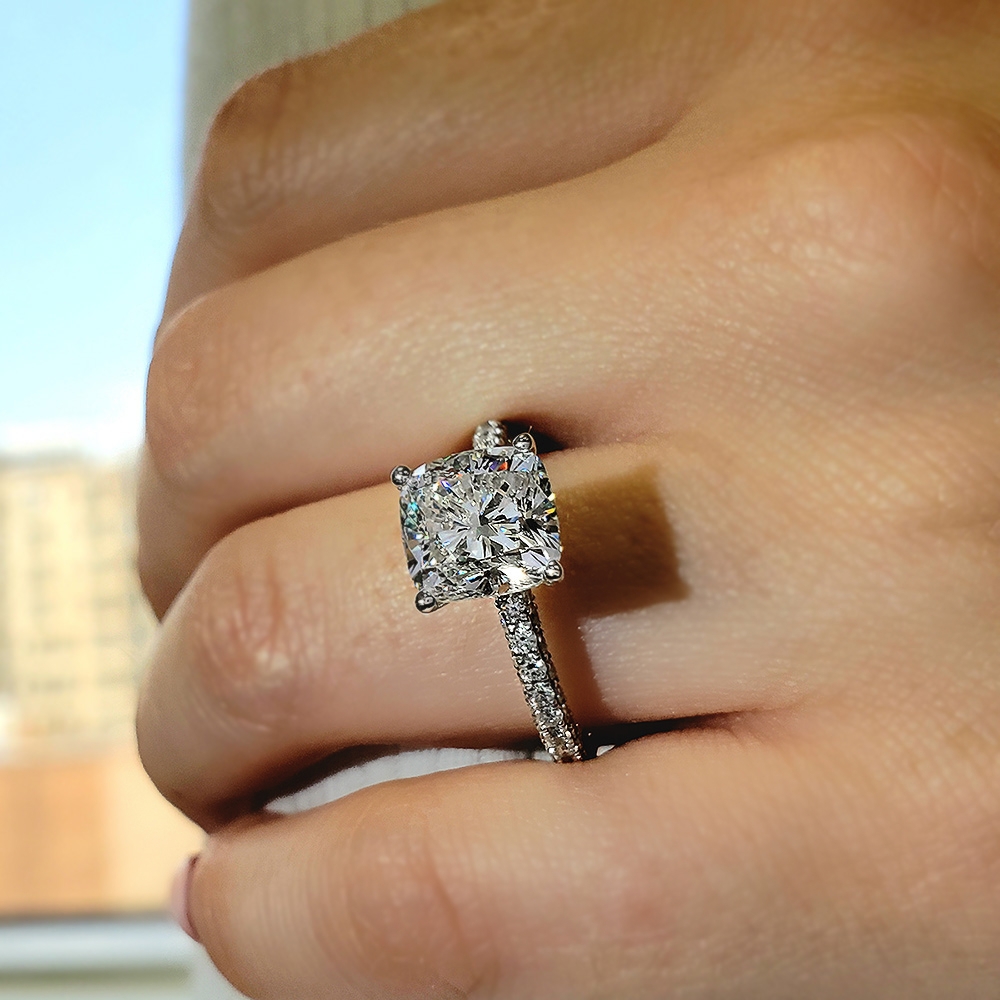 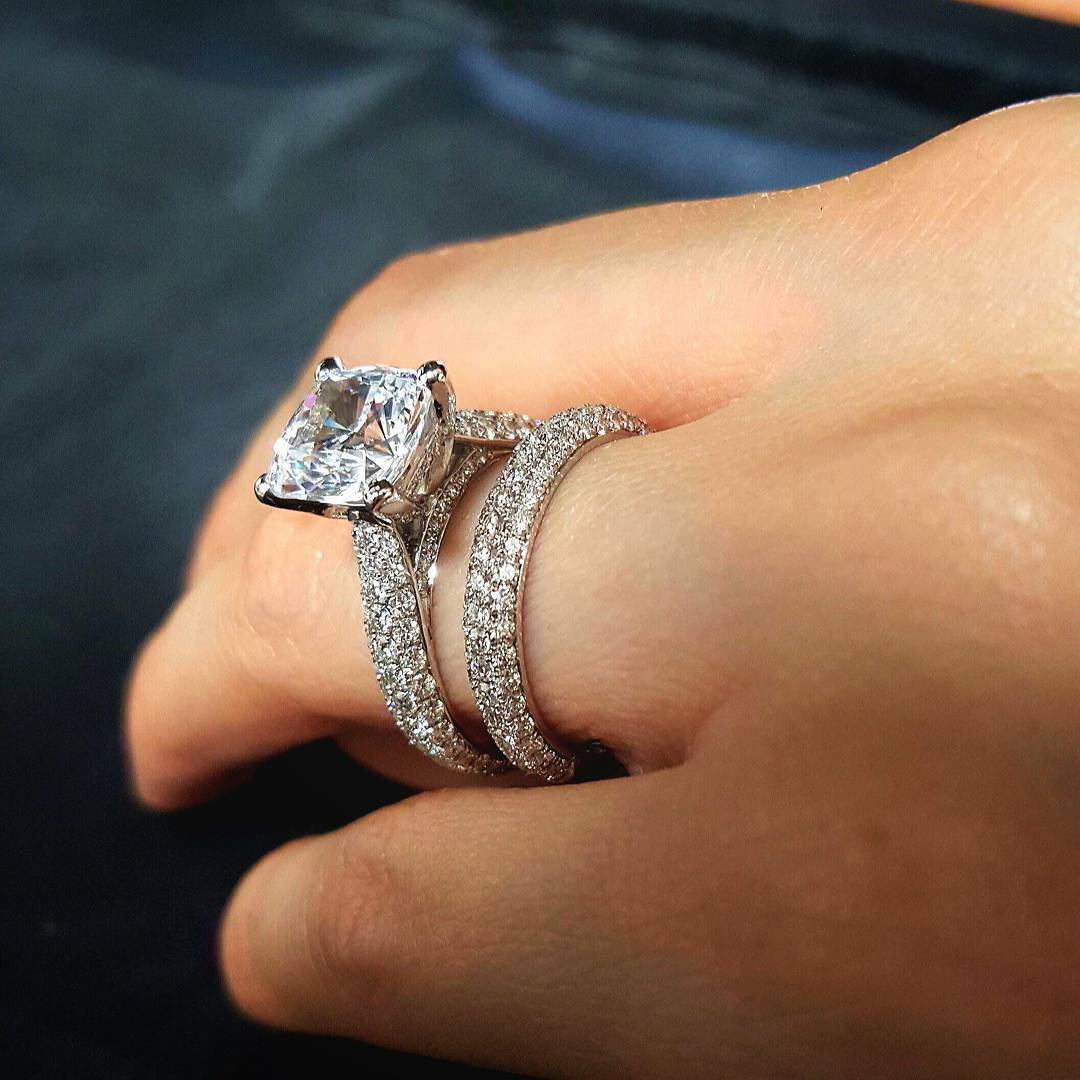 Elongated cushion cut diamonds still fall into the cushion cut category, but their shape doesn't fit the even mold of a perfect square. In most cases, these diamonds are elongated into a rectangular shape instead. They're normally set vertically, with the length taller than the width.

How can you know if you're looking at an elongated cushion cut diamond over a square one?
Take a look at the stone's height to width ratio. A ratio of 1.00 means it's a perfect square. If it's anything above 1.1 ratio, it's an elongated cushion cut. The ratio can be found by the dividing the height (mm), by the width (mm) of the stone.
For example:  a diamond with a height of 6mm and width of 5mm has a 1.2 ratio. ( 6mm ÷ 5mm = 1.2)

Note that cushion cut diamonds with a ratio of 1.1 or 1.14 will still resemble squarish for the most part. For a truly elongated shape, look for a ratio of 1.15 to 1.20. This means that one side is 15%-20% longer that the other, giving the diamond a defined rectangular shape.

Below is two examples of elongated cushion cut engagement rings. 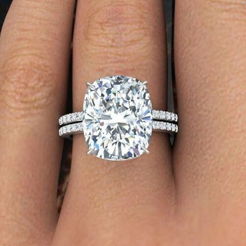 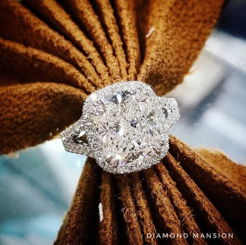 At its height during the 19th century, the old mine cut was the most popular style of diamond by far. It wasn't until the technological advances of the 20th century, when jewelers started developing more elaborate cuts, that other designs began to emerge.

Today, when we describe a diamond as being a true antique cushion cut, we mean that the diamond has been hand cut, as was the practice at the time, rather than being cut with a machine as most are today. While the basics of cushion cut design are still noticeable (small crown, high table, large culet), the beauty of these stones is that no two are alike.
At that time, and through the 1920s, cushion cut diamonds had fewer and longer facets. They were also less brilliant than their modern-day counterparts. Still, when you consider that jewelers at the time had only candlelight to work by and managed to produce such intricate and incredible results, the real importance and legacy of an antique cushion cut diamond emerge.

Now that we've discussed the different styles of cushion cut diamonds, that should cover all the variety, right?

Not quite! In addition to the shape of your stone, you can also choose a specific type of faceting. This refers to the way that the diamonds are cut as they're transformed from a rough stone into a brilliant gem.

The three most common styles of cushion cut diamond faceting are:

Let's take a look at each of these in greater detail.

Orignal cushion cut diamonds were cut into "step facets." This means that the facets were elongated and created into rows, for a final product that resembled a mirrored staircase. As he worked to create the first round brilliant cut diamond, industry legend Marcel Tolkowsky noticed that the stone would produce more glimmer and fire if the facets weren't cut horizontally, but perpendicularly instead.

Soon, this concept was applied to square cushion cut diamonds, as well. The result? A shinier, sparklier diamond that kept its original profile but was far more brilliant. In this cut, the facets in the diamond's pavilion originate in its center, then extend dramatically outward toward the edge, or girdle.

Thus, these cuts have a distinct star-like appearance, along with an unmistakable sheen. They also have larger facets than other cuts and look like a beautiful blend of a round-cut brilliant diamond with a cushion shape. 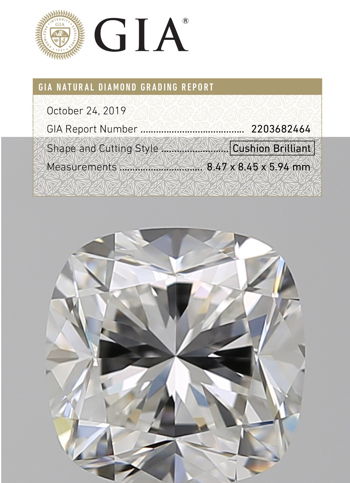 At first glance, it might appear that crushed ice cushion cuts have no discernable pattern. Initially, they look like pieces of diamonds randomly fused together to create a singular stone.

But, take a closer look. These glimmering stones have a unique characteristic: their center looks like shattered glass, a distinct touch that no other faceting designs mimic. This look is attributed to the diamond's structure. The facets on the bottom of the stone are smaller than the ones you'll find on most cushion cut diamonds.

When arranged together, these facets bounce light off one another, giving crushed ice cushion cuts their special effect. While you can find some radiant cut diamonds that have a crushed ice effect, this design is normally reserved for cushion cuts only.

While the facets on a brilliant cushion cut diamond extend from the center all the way to the outer girdle, a modified cushion cut (that is not crushed ice) makes a slight variation to this design. Here, the facets still originate in the pavilion, but they stop short of reaching the girdle. Instead, a new row of facets appears at this outer edge, right below the girdle.

This results in a glittering flower shape, rather than a star shape like the brilliant cushion cut produces. 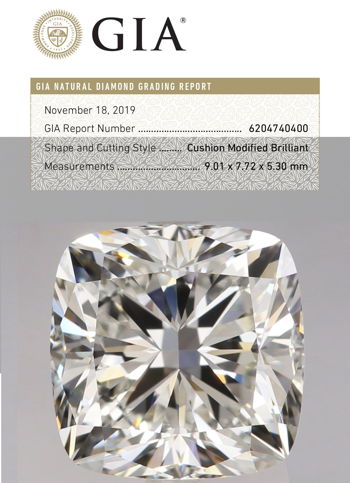 As you can see, there are many different kinds of cushion cut diamonds designed to fit every preference. As you prepare to find the one of your dreams, it helps to review a quick cut guide, first.

At Diamond Mansion you'll find cut & brilliance is divided into three categories or ratings, including:

The diamonds are placed into each category based on the characteristics of the following factors:

What are the characteristics of each? Let's review.

When you're ready to surprise your special someone with a piece of legacy jewelry she'll wear forever, cushion cut diamonds are ideal. Always classy even after centuries of wear, these are investment pieces meant to last a lifetime, and then some. Now that you know the different kinds available, are you ready to pick out the perfect one? If so, we'd love to help. We offer a wide variety of cushion cut diamond rings in our online shop. Browse our full line and contact us if you need any guidance along the way! 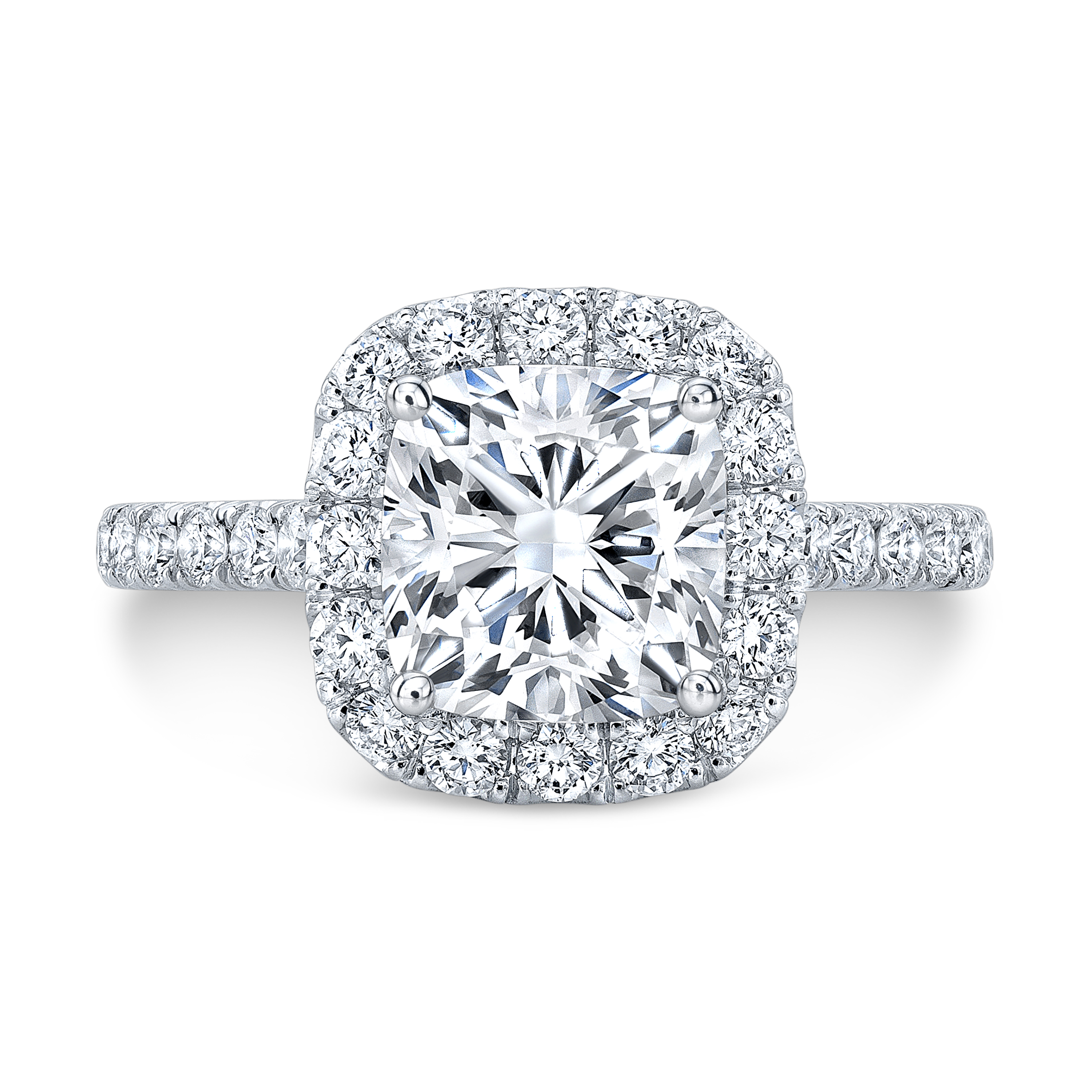 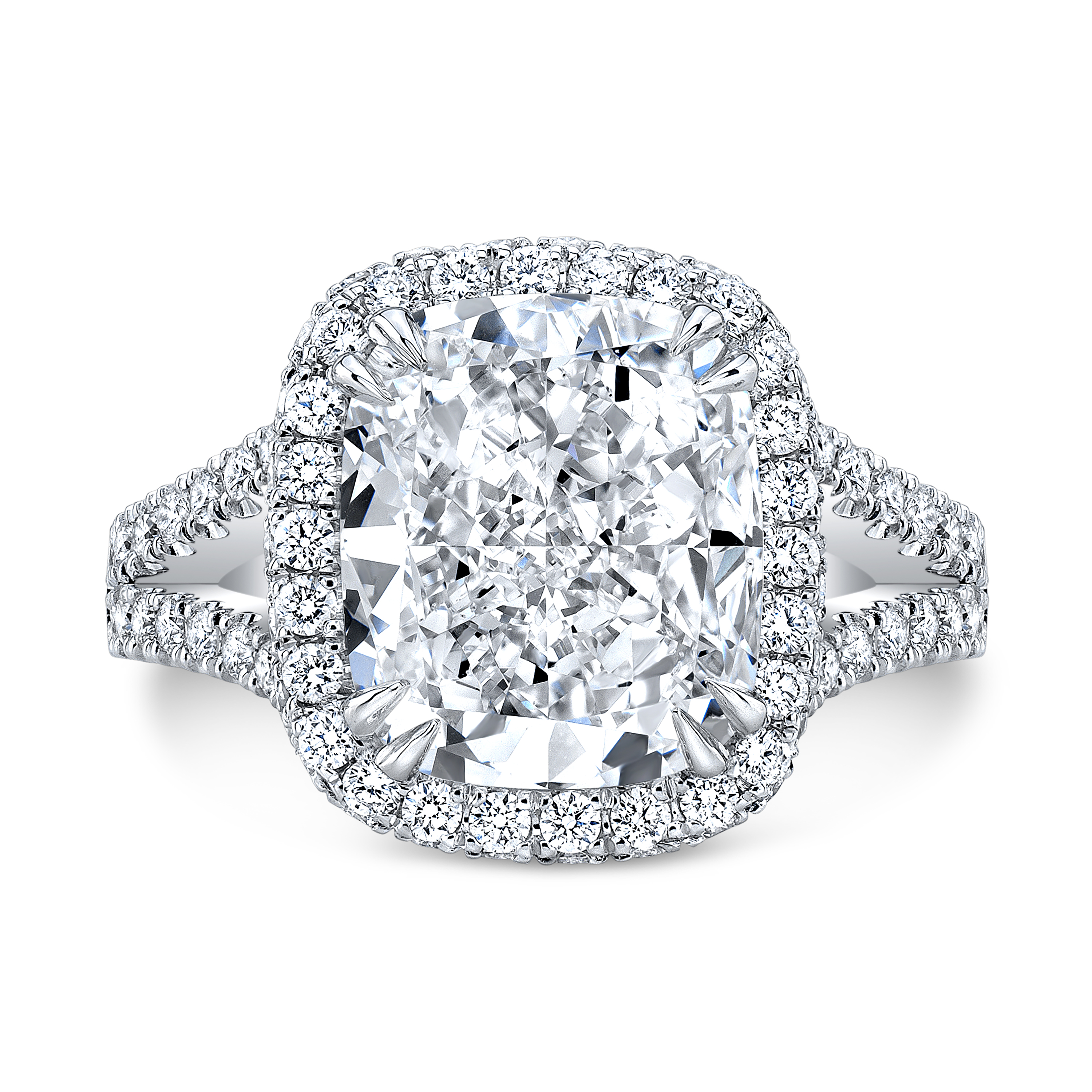 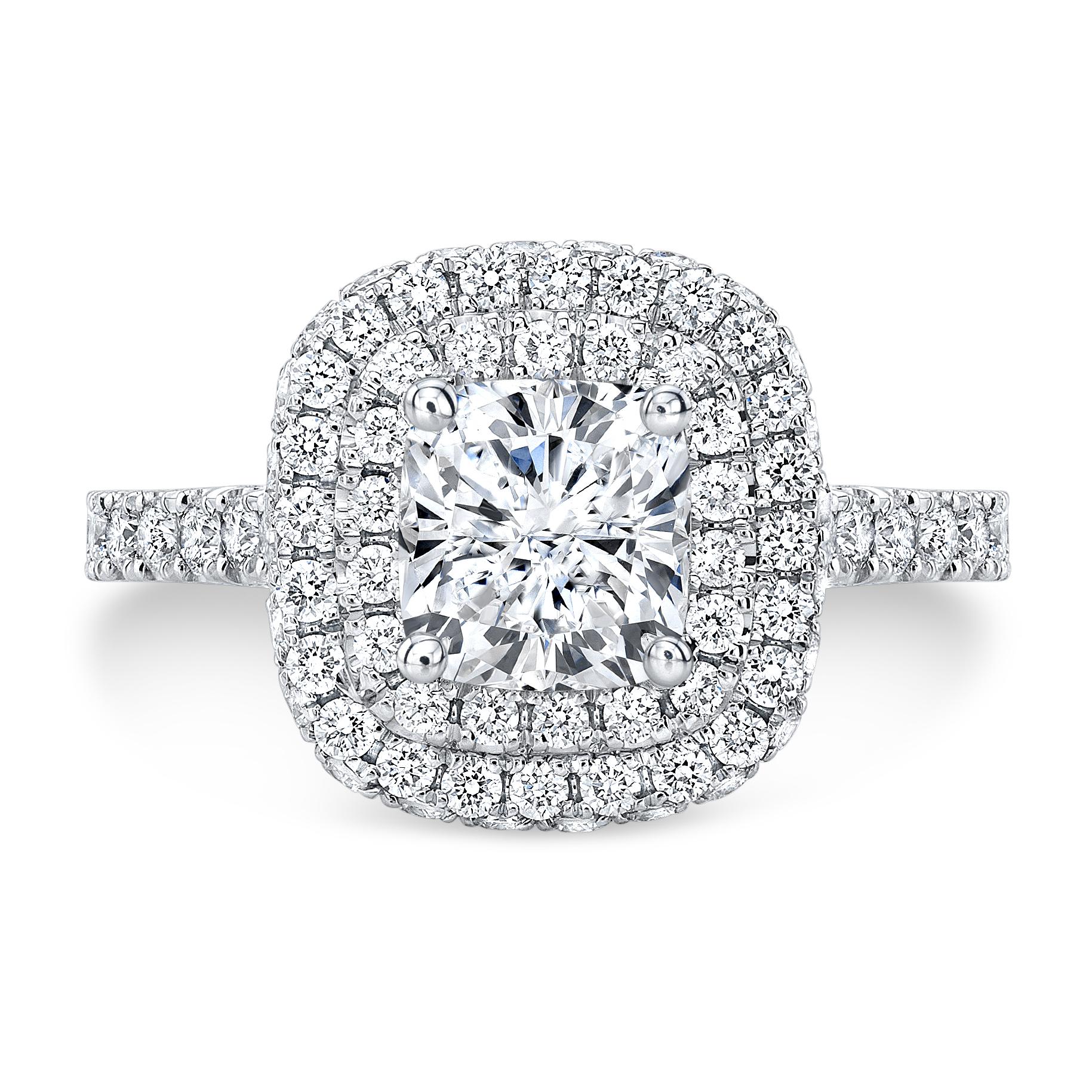 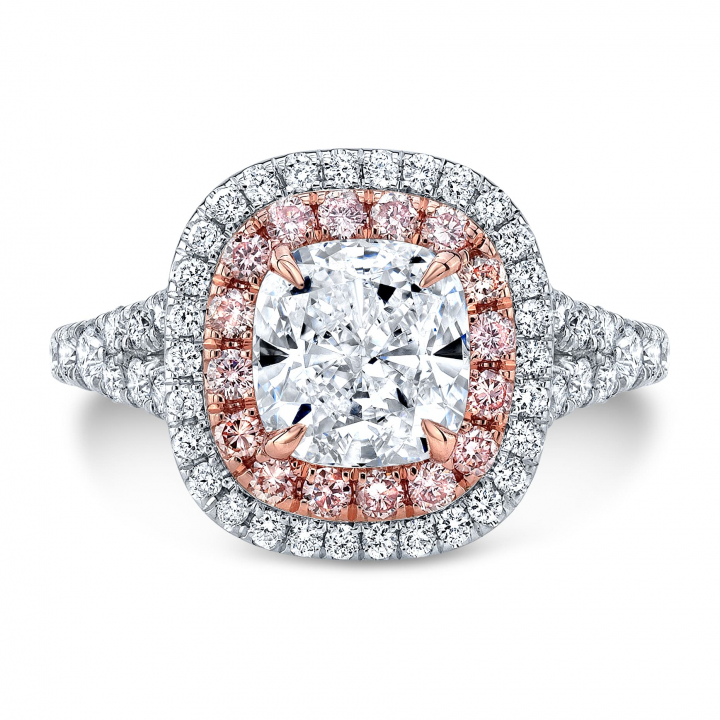 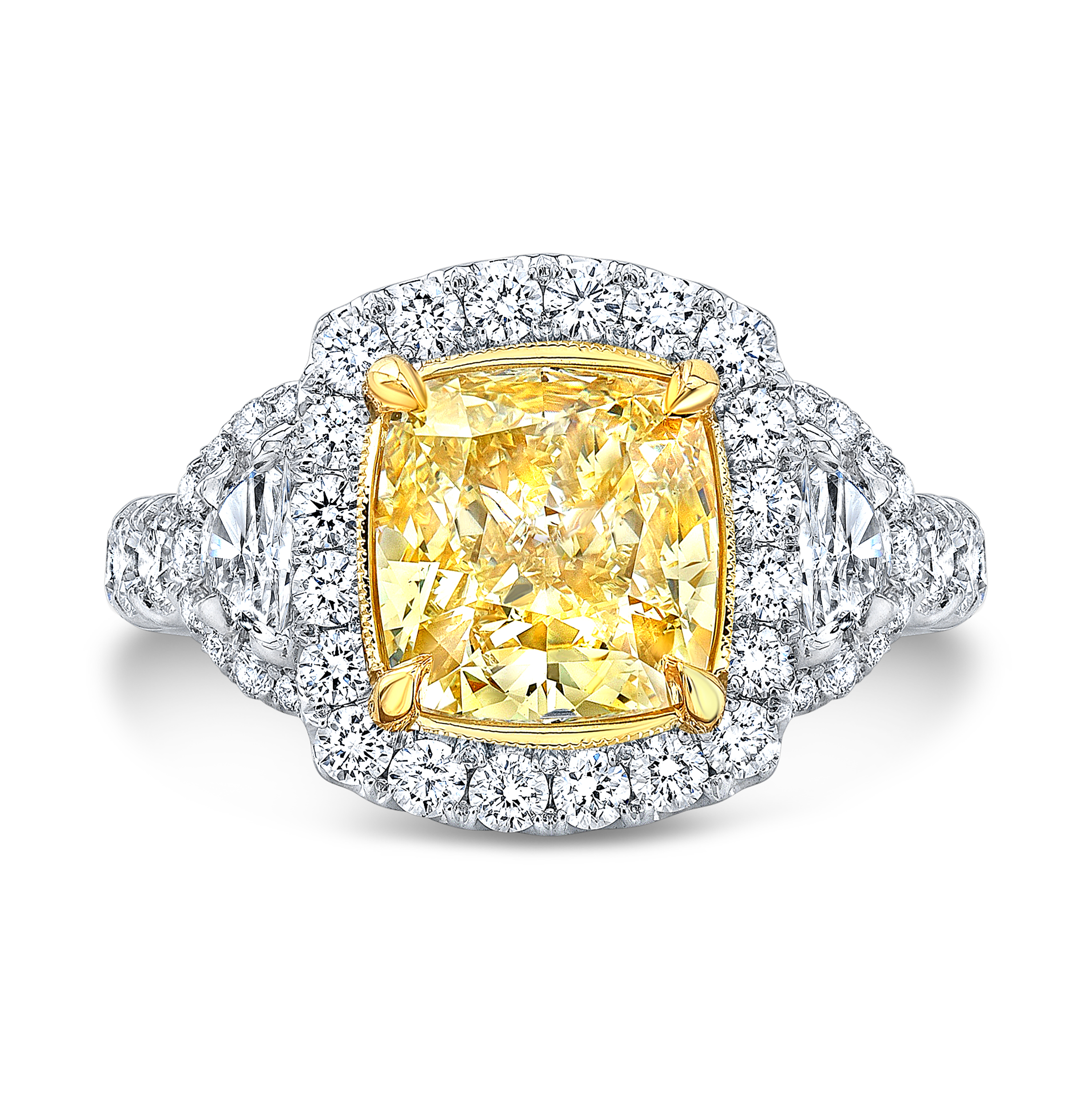 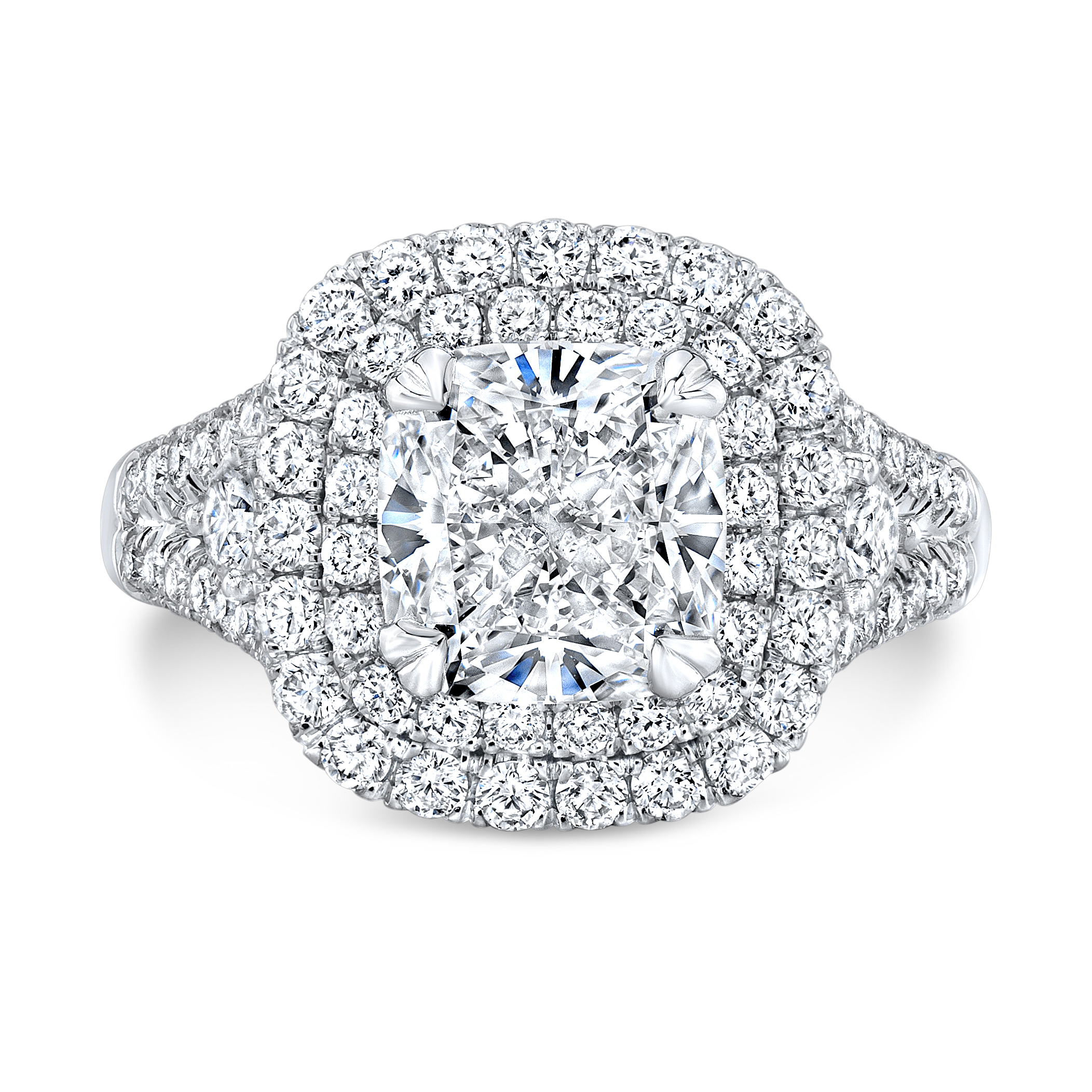 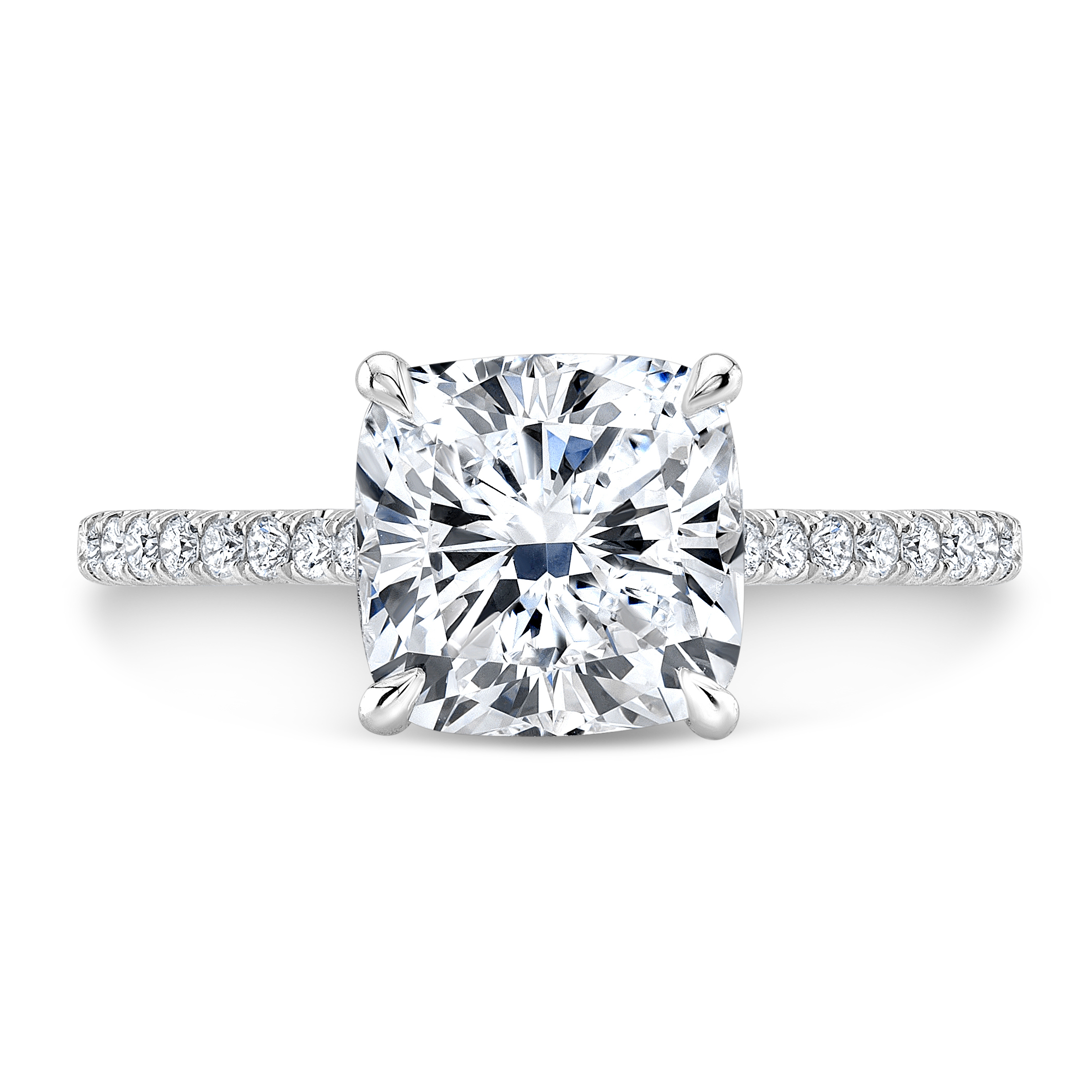 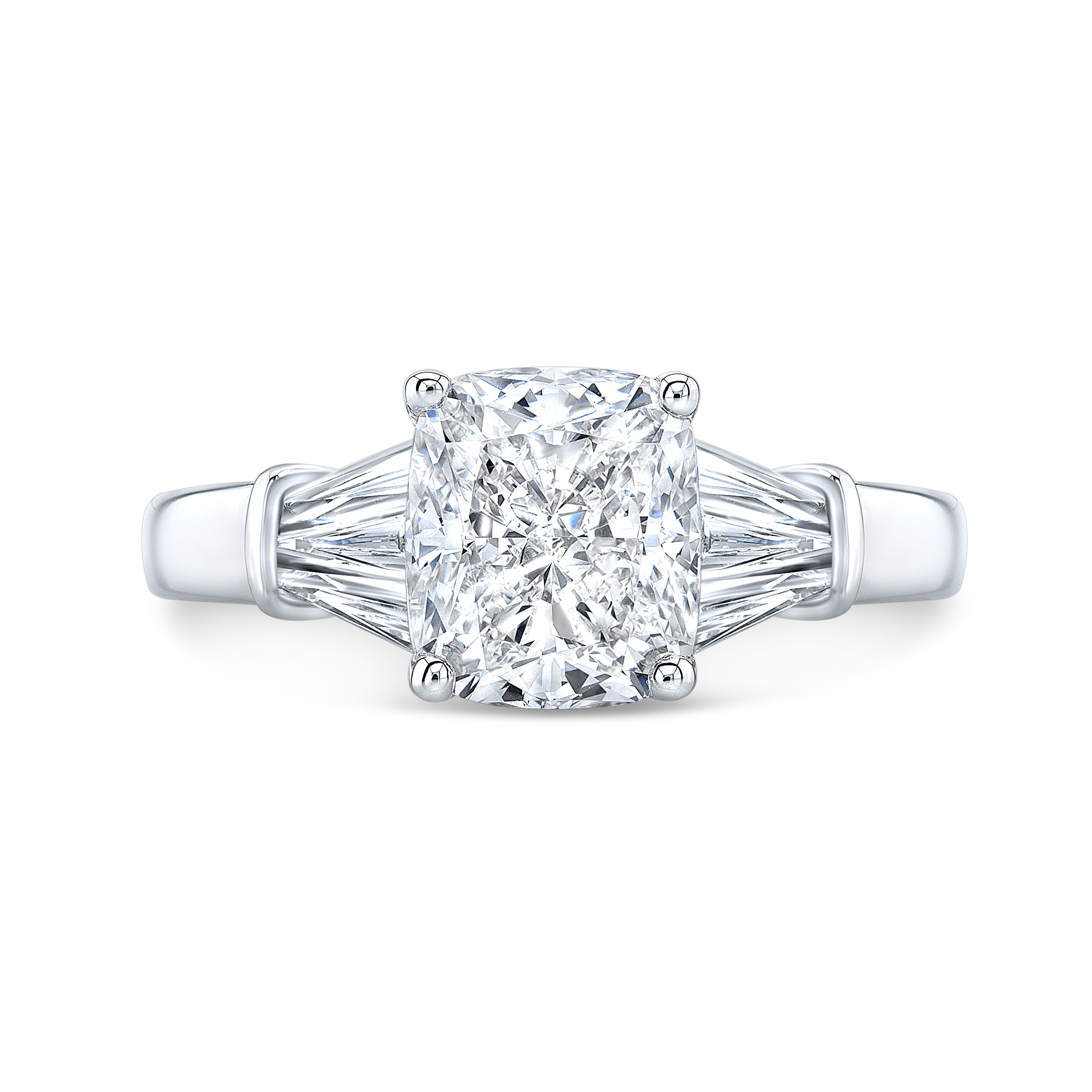 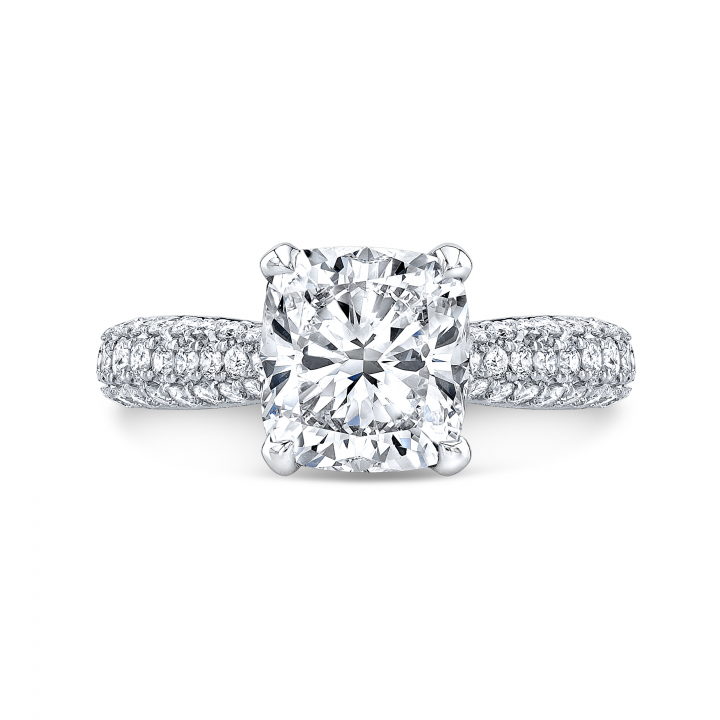