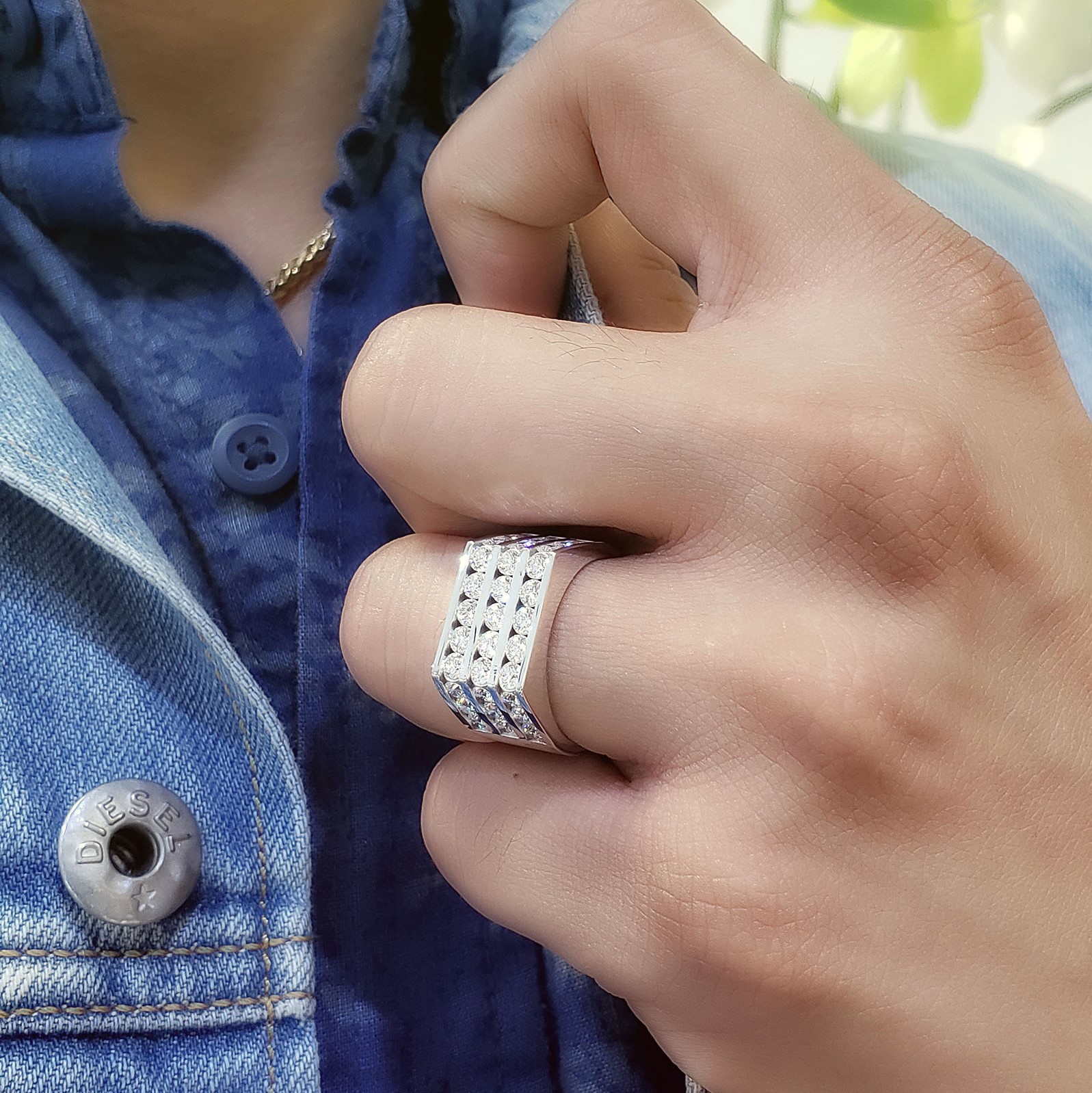 The tradition of giving your partner an engagement ring to signify your intent to marry them has been around since the fifteenth century.

The tradition dictates that the man gets down on one knee, sometimes in a romantic setting, and presents his partner with a diamond ring while asking, “will you marry me?”

Hopefully, the partner agrees. The man then slips the ring onto the ring finger of his new fiance’s left hand, and the two are officially engaged.

However, can it work the other way around? Do men wear engagement rings?

But before we tell dive in to the way men wear engagement rings, lets first tease you with a few of our best selling men’s engagement rings. All designed and crafted at Diamond Mansion.

A brief history of engagement rings

It’s documented that the ancient Egyptians were the first to use a wedding band to symbolise the unity of two people, and some believe both the Egyptians and the Greeks may have used some form of engagement ring.

However, the first widely documented use of an engagement ring is from 1477, when the Archduke Maximillian of Austria gave his fiance, Mary of Burgundy, a ring to mark their engagement.

It wasn’t until the mid-nineteenth century that diamonds were discovered, and displayed as a symbol of wealth and nobility. One popular way to wear diamonds was by mounting them on rings. Throughout the Victorian era, diamond engagement rings grew in popularity. However, during the early to mid-twentieth century, during the Great Depression and the First World War, diamond buying saw a rapid decline.

Following the Second World War, with the price of diamonds low, De Beers launched their famous “A diamond is forever” marketing campaign, and helped establish the diamond engagement ring as an integral part of the engagement and marriage journey. As a result, it’s still common today for one partner to present another with a diamond ring during the proposal.

Bringing engagement into the twenty-first century

Humanity has come a long way since the fifteenth century. Back then, engagement rings were a symbol of “ownership” over a woman. Today, an engagement ring represents a couple’s commitment to one another.

It’s now becoming increasingly common for women to propose to their partners, and of course for same-sex couples to get engaged and married.

For centuries there has also been the Irish tradition known as Bachelor’s Day, which states a woman can propose to a man every Leap Year, on February 29th. Unbelievably, at one time, this rule even had a legal basis in England and Scotland.

Of course in the modern world, either partner can propose to the other. However, many couples do stick to the tradition of waiting for the man to propose.

But when a man is proposed to, is he supposed to wear an engagement ring?

Can a man wear an engagement ring?

Yes, of course, any man can wear an engagement ring so long as they’re comfortable doing so. Due to traditions, some men may not feel comfortable, however, they’re perfectly entitled to do so, and shouldn’t feel embarrassed about this display of love and commitment to their partner.

As we progress, typical gender roles are being broken down. It’s becoming increasingly common for women to propose to men, and for men in LGBTQ+ relationships to propose and be proposed to.

There’s now an increase in engagement rings designed for men, as more and more guys are proposed to by their partners.

What is a male engagement ring?

That being said, a male engagement ring can be anything. Sticking to tradition, the ring is likely to contain diamonds. An engagement ring intended to be worn by a man is more likely to have a band-style design, rather than one with a slimmer design and central diamond.

It’s purely down to the recipient of the ring as to their preference. They may prefer a more “masculine” style engagement ring, but may also be equally as happy with a “feminine” style design. There is no right or wrong, simply preference.

There have even been instances where male celebrities have worn engagement rings, including Justin Bieber and Ed Sheeran. As a result, there has been an overall increase in men wearing engagement rings, aka the “mengagement” ring.

Should both partners wear engagement rings?

This is, again, purely a personal choice. With engagement rings no longer meaning that a woman is the “possession” of the man, there’s no reason why both partners shouldn’t be able to wear an engagement ring. This is similar to how both partners will wear a promise ring as a symbol of commitment to one another.

In South America, it has long been a tradition for both partners to wear an engagement ring. Only now are other countries starting to catch up.

What hand does a man wear an engagement ring on?

This question, again, has no right answer. You can wear an engagement ring on any finger, on either hand. However, there are traditions as to which hand to wear it on, depending on where you live.

However, it is traditional to wear them on your right hand in Austria, Norway, Denmark, Spain, Russia, Portugal, Poland, Bulgaria, Greece, and several other European and South American countries.

For more information about wedding ring finger, check out our blog post on What does it mean to wear a wedding ring on your right hand?.

Do guys buy their own engagement rings?

If a man has proposed to his partner and they’ve said yes, and the man also wants to wear an engagement ring, then there’s still the tricky question of who buys it.

Traditionally, the man will buy his partner their engagement ring ahead of the proposal. Sometimes, the partner will choose their ring after the proposal. In both of these scenarios, that still leaves the man questioning whether he will have to pay for his own ring, or if the partner is expected to pay.

Unfortunately, this is another question that doesn’t have a straightforward answer and is something the couple will need to discuss between themselves. It will come down to the financials of the couple, and it shouldn’t be expected that the gesture is reciprocated. A couple planning to spend the rest of their lives together should hopefully be able to work this out!